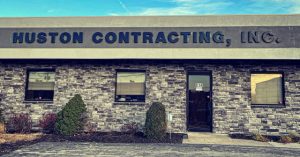 Our company was founded on April 5, 1966, under the name of Huston Asphalt. The original owner was Milton Huston (1927-2002), along with his wife, DaOnne. The company’s primary line of work was small asphalt paving jobs such as driveways, parking lots, etc. Huston Asphalt typically found most of its work in Olathe and the surrounding Johnson County area. We paved for well-known commercial and residential building contractors. Huston Asphalt also did a considerable amount of work each summer for the local School Districts. We also constructed the original athletic track and football field for Mid-America Nazarene University in the spring of 1977.

Douglas M.Huston, the company’s current Owner and President, joined the company in 1973. In 1978 facing an anemic economy, 21% interest rates, and the lingering effects of the Oil Embargo, Mr.Huston began to transform the company from a paving contractor into a telecommunications contracting company. In March of that year, we entered into a Contract with Southwestern Bell Telephone Company. Bill Maggard was instrumental in helping us into this market. The corporate name was changed during that period to Huston Contracting, Inc., designed to reflect this broader scope of associated work. Then in 1979, the company took a bolder step entering into the cable television revolution which was in its infancy. His visionary hunch was purely instinctive, however, his idea proved to be accurate as Huston Contracting, Inc. began installing hundreds of miles of CATV coaxial cable. A defining moment in this new endeavor came in 1980 when Landmark Cablevision out of New York purchased Olathe CATV along with Jackson County Cablevision. Huston Contracting, Inc. was already working for both of these companies as a new and aggressive round of capital investment was deployed. Our company continued to expand its telecommunications work on a much larger scale with Southwestern Bell after the divestiture of AT&T in 1984.

With the ever-expanding business operations, Doug’s wife, Mary, joined Huston Contracting, Inc. in 1980. Mrs.Huston’s commitment, intelligence, and work ethic could never be over-stated. In the late ’80s through the 90’s we expanded once again by developing various tracts of land to provide home builders lots for construction. Huston Contracting, Inc. remains strong today, after surviving the worst downturn in the economy since the Great Depression from 2008-2010. Douglas R. Huston joined the construction company as the family’s third generation in 2009.

Huston Contracting, Inc. is growing and transforming once again as we diligently adapt to the ever-changing cultural environment of our customers. Today in addition to our variety of services we provide innovative design-build projects for fully integrated backyard entertainment centers, along with concrete and asphalt repair, lawn and landscaping maintenance, and directional boring services for telecommunications, public and private projects.

The Huston Family continues to live out their faith by giving back to the community. Their passion to share has been extended to the Miracle League Family Center, Kid’s TLC, and the Cook Center on the campus of Mid America Nazarene University. Also, the Olathe Health System’s Charitable Foundation, Fellowship Bible Church, New Hope Food Pantry, Olathe Public School Foundation, Sleep in Heavenly Peace, and Youth Sports. A legacy for more than 50 years.